This account of Anne Boleyn’s fall from royal favor was written by the Spanish ambassador Eustace Chapuys, in a letter to Emperor Charles V.

Chapuys despised Anne; she returned the feeling. He was the chief adviser and confidante of Henry VIII’s first wife, Katharine of Aragon. He did not recognize the king’s marriage to Anne and referred to her as ‘the concubine’ and ‘the whore’ in his official dispatches. Like many, Chapuys blamed Anne for the king’s poor treatment of Katharine and their daughter, Princess Mary.

Chapuys had confidently predicted Anne’s fall for several years. When it actually happened, he was quite surprised. He had not recognized the depth of Henry’s feelings for the woman who would become his third wife, Jane Seymour.

Despite Chapuys’s dislike of Anne, his account gives little credit to the king. He clearly considered Henry’s behavior to be inappropriate; it was also unpopular. 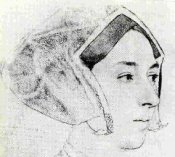 The joy shown by the people every day, not only at the ruin of the concubine but at the hope of princess Mary’s restoration is inconceivable, but as yet the king shows no great disposition towards the latter; indeed he has twice shown himself obstinate when spoken to on the subject by his council. I hear that, even before the arrest of the concubine, the king, speaking with Mistress Jane Seymour of their future marriage, the latter suggested that the princess should be replaced in her former position; and the king told her she was a fool, and ought to solicit the advancement of the children they would have between them, and not any others. She replied that in asking for the restoration of the princess she was seeking the rest and tranquility of the king, herself, her future children, and the whole realm; for, without that neither your majesty nor this people would ever be content.

I will endeavor by all means to make her continue in this vein; I hope also to go and speak with the king within three days, and with members of the council in general. I think the concubine’s little bastard Elizabeth will be excluded from the succession, and that the king will get himself requested by parliament to marry. To cover the affection he has for the said Seymour he has lodged her seven miles away in the house of a grand esquire, and says publicly that he has no desire in the world to marry again, unless he is constrained by his subjects to do so. Several have already told me and sent to say that, if it cost them their lives, when parliament meets they will urge the cause of the princess to the utmost.

The very evening the concubine was brought to the Tower of London, when the duke of Richmond went to say goodnight to his father, and ask his blessing after the English custom, the king began to weep, saying that he and his sister, meaning the princess, were greatly bound to God for having escaped the hands of that accursed whore, who had determined to poison them; from which it is clear that the king knew something about it.

Master Norris, the king’s chief butler, Master Weston who used to lie with the king, Master Brereton gentleman of the chamber, and the groom of whom I wrote to your majesty by my man, were all condemned as traitors. Only the groom confessed that he had been three times with the said whore and concubine. The others were condemned upon presumption and certain indications, without valid proof or confession.

The concubine and her brother were condemned for treason by all the principal lords of England, and the duke of Norfolk pronounced sentence. I am told the earl of Wiltshire was quite as ready to assist at the judgement as he had done at the condemnation of the other four. Neither the whore nor her brother was brought to Westminster like the other criminals. They were condemned within the Tower of London, but the thing was not done secretly, for there were more than 2,000 persons present. What she was principally charged with was having cohabited with her brother and other accomplices; that there was a promise between her and Norris to marry after the king’s death, which it thus appeared they hoped for; and that she had received and given to Norris certain medals, which might be interpreted to mean that she had poisoned the late queen, and intrigued to do the same to the princess. These things she totally denied and gave to each a plausible answer. Yet she confessed she had given money to Weston, as she had often done to other young gentlemen. She was also charged, and her brother likewise, with having laughed at the king and his dress, and that she showed in various ways she did not love the king, but was tired of him. Her brother was charged with having cohabited with her by presumption, because he had once been found a long time with her, and with certain other little follies. To all he replied so well that several of those present wagered 10 to 1 that he would be acquitted, especially as no witnesses were produced against either him or her, as it is usual to do, particularly when the accused denies the charge.

I must not omit that among other things charged against him as a crime was, that his sister had told his wife that the king was impotent. This he was not openly charged with, but it was shown him in writing, with a warning not to repeat it. But he immediately declared the matter, in great contempt of Cromwell and some others, saying he would not in this point arouse any suspicion which might prejudice the king’s issue. He was also charged with having spread reports which called in question whether his sister’s daughter was the king’s child. To which he made no reply. They were judged separately and did not see each other. The concubine was condemned first, and having heard the sentence, which was to be burnt or beheaded at the king’s pleasure, she preserved her composure, saying that she held herself ready to greet death and that what she regretted most was that the above persons, who were innocent and loyal to the king, were to die for her. She only asked a short time for confession. Her brother, after his condemnation, said that since he must die, he would no longer maintain his innocence, but confessed that he had deserved death. He only begged the king that his debts, which he recounted, might be paid out of his goods.

Although everybody rejoices at the execution of the whore there are some who murmur at the mode of procedure against her and the others, and people speak variously of the king; and it will not pacify the world when it is known what has passed and is passing between him and Jane Seymour. Already it sounds ill in the ears of the people, that the king, having received such ignominy, has shown himself more glad than ever since the arrest of the whore; for he has been going about banqueting with ladies, sometimes remaining after midnight, and returning by the river. Most of the time he was accompanied by various musical instruments, and, on the other hand, by the singers of his chamber, which many interpret as showing his delight at getting rid of a thin, old and wicked fool with hope of change, which is a thing especially agreeable to this king. He supped lately with several ladies in the house of the bishop of Carlisle, and showed an extravagant joy, as the said bishop came to tell me next morning, who reported moreover that the king had said to him, among other things, that he had long expected the issue of these affairs, and that thereupon he had before composed a tragedy, which he carried with him; and so saying the king drew from his bosom a little book written in his own hand, but the bishop did not read the contents. It may have been certain ballads that the king had composed, at which the whore and her brother laughed as foolish things, which was objected to them as a great crime.

Three days after the concubine’s imprisonment the princess was removed, and was honourably accompanied both by the servants of the little bastard and by several gentlemen who came of their own accord. Many of her old servants and maids at this news went to her, and although her governess allowed them to remain, she was warned by me not to accept or retain anyone but those given her by the king her father. What I most fear as regards her is, that when the king is asked by parliament to restore her to her rights, he will refuse his consent unless the princess first swears to the statutes invalidating the first marriage and the pope’s authority. To this, I think, she will not easily yield, although I should advise her to acquiesce in everything as far as she can without prejudice to her conscience.

Link will appear as Hanson, Marilee. "The Execution Of Anne Boleyn 1536" https://englishhistory.net/tudor/the-execution-of-anne-boleyn/, February 8, 2015