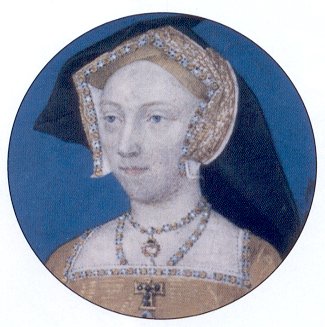 Here lies Jane, a phoenix
Who died in giving another phoenix birth.
Let her be mourned, for birds like these
Are rare indeed.
Jane Seymour’s epitaph

Henry VIII had six wives but only one gave him a son. Jane Seymour fulfilled her most important duty as queen, but she was never crowned and died just twelve days after the long and arduous birth. She was Henry’s third wife and seems never to have made much of an impression upon anyone except the king. Her meek and circumspect manner was in distinct contrast to Henry’s second wife, the sharp-tongued Anne Boleyn. Jane had served as lady-in-waiting to Anne and she supplanted her in much the same way Anne had replaced Katharine of Aragon in Henry’s affections. We will never know if Jane sought the king’s favor or was a frightened pawn of her family and the king’s desire. But we do know that she bravely sought pardons for those involved in the Pilgrimage of Grace revolt in 1536. Rebuked by the king, and mindful of the fates of his first two wives, she retired into a quiet and decorous role. The triumphant birth of her son Edward allowed her two ambitious brothers into the king’s inner circle; however, both would be executed during Edward’s reign.

Jane Seymour’s family was of ancient and respectable lineage. Her father was Sir John Seymour of Wolf Hall in Wiltshire; he served in the Tournai campaign of 1513 and accompanied Henry VIII to the Field of the Cloth of Gold in 1520. He was made a knight of the body and later a gentleman of the king’s bedchamber. Both positions were very desirable for they allowed personal access to the king. Courtiers were always desperate to gain the king’s ear, if even for a brief moment. Sir John was able to secure appointments at court for his family; of his eight children, three would come to historical prominence – the eldest son Edward as duke of Somerset and Lord Protector, another son Thomas as Lord Admiral and husband of Henry VIII’s last queen, and his daughter Jane as queen of England.

The Seymour rise to prominence at Henry’s court mirrored that of the Boleyns; it was the path sought by all English families with a minor pedigree or clever son. But gaining the king’s favor was rather different than maintaining it and the Seymours proved far more adept at the latter.

Jane’s birthdate is unknown; various accounts use anywhere from 1504 to 1509. She first came to court as a lady-in-waiting to Katharine of Aragon, Henry VIII’s first wife. But soon enough Anne Boleyn was queen and Jane attended her. She witnessed first-hand the tempestuous relationship between Anne and Henry. Jane herself was known for her quiet and soothing manner. Certainly Henry knew of her but there is no evidence that he took particular notice until September 1535 when his royal progress stopped at Wolf Hall. Such a visit was a great honor for the Seymour family. And it brought Jane, away from court and its flirtatious young beauties, immediately to the king’s attention.

Many historians have argued this was the beginning of Henry’s infatuation, but it was unlikely. Anne Boleyn was not completely out of favor just yet; she was pregnant again, though she would suffer a miscarriage in January. And Henry’s flirtations were confined to Anne’s cousin, Madge Shelton. Jane Seymour was perhaps in the king’s thoughts but he did nothing for several months. 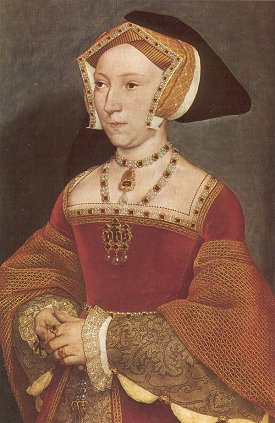 Portrait of Jane Seymour by an unknown artist

In February 1536, however, foreign ambassadors began to report rumors of the king’s romance with Jane. They speculated upon her chances of becoming queen. Henry made his affection clear to Jane; she received costly gifts (which she prudently returned) and her brothers were promoted at court. In April 1536, Edward Seymour and his wife moved to rooms which connected through a hidden passage with the king’s apartments. Henry could thus continue his courtship of Jane in relative privacy.

But the king was also mindful of the vicious rumors and public outrage which had accompanied his open courtship of Anne Boleyn while still wed to Katharine of Aragon. He was far more discreet with Jane, and this undoubtedly suited her character. She was content to remain unknown. There were rumors that she would not dine alone with the king, insisting always upon a chaperone, and that she responded to a particularly bold flirtation by reminding the king of his marriage.

Henry did not need to be reminded of his second marriage; it had become a bitter disappointment for him. He was determined to rid himself of Anne Boleyn. Jane’s presence was merely another impetus for action.

Another impetus was the death of Katharine of Aragon on 7 January 1536. All of Europe, and most Englishmen, had regarded her as the king’s rightful wife and Anne as merely his concubine. On 29 January, Anne miscarried a son; the king ominously declared that he would have no more children by her. For Henry, it was suddenly clear that if he could rid himself of Anne and marry Jane, then he would have a legitimate marriage recognized by all and another possibility for a son.

The king began to mention publicly that he had been bewitched into marriage with Anne; he knew his words would reach her. Anne was terrified but could do little. She had few friends at court, and even those were prepared to desert her for the king’s favor. On 2 May, she was arrested and taken to the Tower of London. On 15 May, she was condemned to death; Henry sent a personal message to Jane with the news. Four days later Anne was executed; the day after, 20 May, the king was formally betrothed to Jane. They married ten days later on 30 May and Jane was publicly declared queen on 4 June. She chose an apt motto, ‘Bound to Obey and Serve’.

She was never granted the lavish coronation which Anne had enjoyed. It was summertime and the minor plagues were sweeping through London; the king said she must wait until the spring to be crowned. It is also possible, and was rumored, that Henry had no intention of crowning Jane until she had proved her worth and provided a son. If she proved barren, he could annul their marriage with hopefully little fanfare.

Almost a decade had passed since the ‘King’s Great Matter’ first began and still Henry did not have a legitimate heir. And on 20 July 1536, he received the devastating news that his only illegitimate son, Henry Fitzroy, duke of Richmond, had died at the age of 17. There had always been the possibility that Fitzroy could have succeeded him, but now Henry VIII was left with only two daughters, both declared illegitimate. It is certain that if Jane had not provided a son, she would have been quickly discarded. Personal affection could not overcome political necessity.

But Jane was able to provide the king with his fondest wish. And indeed the whole country wished for an heir; they had no desire to return to ruinous civil war.

Rumors of her pregnancy began almost immediately after her marriage. But it wasn’t early 1537 that rumors could finally be confirmed as fact. The London chronicler Edward Hall recorded public rejoicing at news of Jane’s quickening: ‘On 27 May 1537, Trinity Sunday, there was a Te Deum sung in St Paul’s cathedral for joy at the queen’s quickening of her child, my lord chancellor, lord privy seal and various other lords and bishops being then present; the mayor and aldermen with the best guilds of the city being there in their liveries, all giving laud and praise to God for joy about it.’

Bonfires were lit and celebrations held throughout England; prayers were offered for a safe delivery. In early October, Jane went to Hampton Court Palace for her lying-in and on 12 October, after a long and difficult labor, she gave birth to the wished-for son. It was the eve of St Edward’s day and so he was baptized by that name on 15 October. His two half-sisters, Mary and Elizabeth, attended the splendid christening ceremony. Mary stood as godmother; Elizabeth was carried in the arms of Thomas Seymour, Jane’s brother who would later plan to marry her. Her grandfather, Thomas Boleyn, also attended the ceremony.

After 29 years as king of England, Henry VIII finally had a legitimate male heir. Past grievances could be forgotten at this grand moment.

Jane did not savor her success for long. The christening ceremony had begun in her bedchamber; she was wrapped in robes and carried on a litter to the king’s chapel. She was able to participate but the long ordeal proved too much. She was already weak and exhausted; she needed quiet and rest and received neither. Only a day later, it was reported that the queen was very ill. Her condition quickly worsened. She was delirious and had a high fever; doctors bled her and attendants hastened to fulfill her craving for sweets and wine. The king’s chief minister Cromwell would later blame the sweets for her death but they did little to harm Jane. Modern historians believe she had puerperal sepsis, or ‘childbed fever’. It was all too common in the 16th century.

It was later rumored that she died from complications of a Cesarean section, that Henry VIII had ordered the child ripped from her womb, but this was unlikely. There were no reports that she was bleeding excessively and she was able to attend the christening and greet visitors. Sadly, Jane was a victim of her times. Poor hygiene and medical knowledge could not stop the fever which finally killed her near midnight on 24 October.

Jane’s early death, at the moment of her great triumph, and her gentle character had an enduring hold on Henry VIII’s memory. She was given a solemn state funeral; Princess Mary acted as her chief mourner. In her short time as queen, Jane had attempted to reconcile Henry and his stubborn daughter. Her body was embalmed and laid to rest in the tomb at Windsor Castle which Henry was building for himself. Years after her death, even while he was married to other women, Jane continued to appear in royal portraits as queen consort. Her special status as mother to the heir was never forgotten.

The king wore black until well into 1538 and waited more than two years to marry again. This was the longest interval between marriages during his reign.