Wyatt was born in 1503 at Allington Castle, Kent. He was the son of Henry Wyatt and Anne Skinner, and was educated at St John’s College, part of Cambridge University. He entered the diplomatic service of Henry VIII around 1526, just as the king’s rumored passion for Anne Boleyn began to attract notice. Wyatt himself was infatuated with Anne Boleyn, but found his desires thwarted by the king. 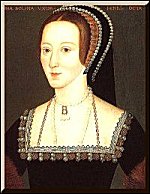 It has often been rumored that Anne was Wyatt’s mistress before Henry VIII fell in love with her, but there is little evidence to support an actual physical relationship. Both she and Wyatt were witty and flirtatious. They enjoyed each other’s company, and there is no doubt Wyatt wished for more personal favors – but he was rebuffed, and for the simple reason that Anne had more glittering prospects (namely, the king of England himself.) Hence the bitter tone of the Petrarchan sonnet opposite. It is an intriguing portrait of Anne and specifically mentions her attachment to the king.

Incidentally, Wyatt was sent on a diplomatic mission to Italy in 1527. It was perhaps an attempt by Henry VIII to rid the court of a potential rival. Wyatt’s association with Anne haunted him again in 1536 when he was imprisoned for having carnal knowledge of the queen. Anne was executed but Wyatt was freed. He served as English ambassador to Spain for two years (1537-39) but suffered imprisonment again in 1541 when Thomas Cromwell fell from power and the Norfolk faction briefly gained ascendancy over the king. Once again, Wyatt did not remain imprisoned long, but he died on 11 October 1542 of unknown causes. He had long since deserted his wife, Elizabeth Brooke, and was living with his mistress, Elizabeth Darrell, and their only child Francis.

As for his poetry, Wyatt’s work was circulated in manuscript during his lifetime and often highly praised.

The first poem was perhaps based upon Petrarch’s sonnet #190. The Latin phrase ‘Noli me tangere’ is taken from the Vulgate; it is translated as ‘Touch me not’. The poem is believed to be a direct comment upon Henry VIII’s infatuation for Anne, her character, and her newfound importance at the English court.

In the second poem, ‘The thing ye seek for’ is, of course, sex. This work, though undated, was probably written after Anne and Henry were wed in 1533. Perhaps Wyatt had been rebuffed by Anne once again; the poem is certainly churlish enough.

‘Whoso List to Hunt, I Know Where Is An Hind’

Whoso list to hunt, I know where is an hind,
But as for me, hélas, I may no more.
The vain travail hath wearied me so sore,
I am of them that farthest cometh behind.
Yet may I by no means my wearied mind
Draw from the deer, but as she fleeth afore
Fainting I follow. I leave off therefore,
Sithens in a net I seek to hold the wind.
Who list her hunt, I put him out of doubt,
As well as I may spend his time in vain.
And graven with diamonds in letters plain
There is written, her fair neck round about:
Noli me tangere, for Caesar’s I am,
And wild for to hold, though I seem tame.

Ye old mule that think yourself so fair,
Leave off with craft your beauty to repair,
For it is true, without any fable,
No man setteth more by riding in your saddle.
Too much travail so do your train appair.
Ye old mule
With false savour though you deceive th’air,
Whoso taste you shall well perceive your lair
Savoureth somewhat of a Kappurs stable.
Ye old mule
Ye must now serve to market and to fair,
All for the burden, for panniers a pair.
For since gray hairs been powdered in your sable,
The thing ye seek for, you must yourself enable
To purchase it by payment and by prayer,
Ye old mule.