This is the only surviving letter written by Henry VIII’s fifth wife. It was written in the spring of 1541, roughly eight months after she married the king. After Catherine’s fall from grace, Culpeper was among the men charged with committing adultery with the queen. It was a treasonable offense, and he was executed for it (along with Francis Dereham.) Culpeper tried to save himself by arguing that he had met with Catherine only because the young queen was ‘dying of love for him’, and would not let him end the relationship. 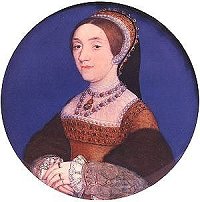 Catherine, for her part, argued otherwise; she told her interrogators that Culpeper ceaselessly begged for a meeting and she was too fearful to refuse. However, the letter clearly supports Culpeper’s version of events. After all, the queen did write ‘it makes my heart die to think what fortune I have that I cannot be always in your company.’

The affection she felt for Culpeper led to a legend surrounding Catherine’s last words – ‘I die a Queen, but would rather die the wife of Culpeper.’ This final declaration of love did not occur; its invention was an attempt to give Catherine’s pathetic and tragic story some mark of distinction.

Catherine was not as well educated as Henry’s other wives, though her mere ability to read and write was impressive enough for the time. This letter taxed her greatly, as she points out in the closing lines. It is transcribed here as originally written, and the grammatical mistakes are Catherine’s own.

Master Culpeper,
I heartily recommend me unto you, praying you to send me word how that you do. It was showed me that you was sick, the which thing troubled me very much till such time that I hear from you praying you to send me word how that you do, for I never longed so much for a thing as I do to see you and to speak with you, the which I trust shall be shortly now. That which doth comfortly me very much when I think of it, and when I think again that you shall depart from me again it makes my heart die to think what fortune I have that I cannot be always in your company. It my trust is always in you that you will be as you have promised me, and in that hope I trust upon still, praying you that you will come when my Lady Rochford is here for then I shall be best at leisure to be at your commandment, thanking you for that you have promised me to be so good unto that poor fellow my man which is one of the griefs that I do feel to depart from him for then I do know no one that I dare trust to send to you, and therefore I pray you take him to be with you that I may sometime hear from you one thing. I pray you to give me a horse for my man for I had much ado to get one and therefore I pray send me one by him and in so doing I am as I said afor, and thus I take my leave of you, trusting to see you shortly again and I would you was with me now that you might see what pain I take in writing to you.
Yours as long as life endures,
Katheryn.
One thing I had forgotten and that is to instruct my man to tarry here with me still for he says whatsomever you bid him he will do it.