The first letter was sent to Mary, queen of Scots at the opening of her trial at Fotheringhay on 12 October 1586. It was written in French.

Four days after Mary’s execution, Elizabeth sent the second letter to Mary’s son, King James VI of Scotland. In it, she asserts her innocence in his mother’s death. 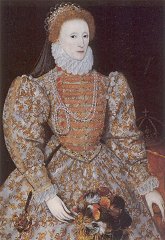 The Darnley Portrait of Queen Elizabeth I

Although she signed the warrant for Mary’s execution, Elizabeth tore it up. Another copy was signed, and – before the queen could change her mind yet again – Burghley and others upon the council sent if off. Elizabeth’s life was in constant danger while Mary lived, as numerous plots attested. Her councilors were determined to keep her safe. As for Elizabeth, she was understandably torn between protecting her throne and taking the life of a fellow sovereign, even one she did not respect or like.

The second warrant was sent from London on 4th February, and reached Fotheringhay on the following evening. On the 7th the Earls of Shrewsbury and Kent, who were in charge of the execution, warned Mary to prepare for death on the following day. On the 9th news of the execution reached London, and was received by the Queen with surprise and horror. She openly raged against her councilors; her capable secretary Davison, who had given her the second warrant, was sent to the Tower.

You have in various ways and manners attempted to take my life and to bring my kingdom to destruction by bloodshed. I have never proceeded so harshly against you, but have, on the contrary, protected and maintained you like myself. These treasons will be proved to you and all made manifest. Yet it is my will, that you answer the nobles and peers of the kingdom as if I were myself present. I therefore require, charge, and command that you make answer for I have been well informed of your arrogance.
Act plainly without reserve, and you will sooner be able to obtain favour of me.

My dear Brother, I would you knew (though not felt) the extreme dolor that overwhelms my mind, for that miserable accident which (far contrary to my meaning) hath befallen. I have now sent this kinsman of mine, whom ere now it hath pleased you to favour, to instruct you truly of that which is too irksome for my pen to tell you. I beseech you that as God and many more know, how innocent I am in this case : so you will believe me, that if I had bid aught I would have bid by it. I am not so base minded that fear of any living creature or Prince should make me so afraid to do that were just; or done, to deny the same. I am not of so base a lineage, nor carry so vile a mind. But, as not to disguise, fits not a King, so will I never dissemble my actions, but cause them show even as I meant them. Thus assuring yourself of me, that as I know this was deserved, yet if I had meant it I would never lay it on others’ shoulders; no more will I not damnify myself that thought it not.
The circumstance it may please you to have of this bearer. And for your part, think you have not in the world a more loving kinswoman, nor a more dear friend than myself; nor any that will watch more carefully to preserve you and your estate. And who shall otherwise persuade you, judge them more partial to others than you. And thus in haste I leave to trouble you: beseeching God to send you a long reign.

Your most assured loving sister and cousin,
Elizabeth R.