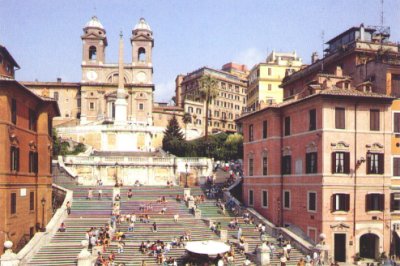 The Keats-Shelley Memorial House is one of my favorite stops in Rome. Along with a visit to Keats’s gravesite at the Protestant cemetery, it’s the perfect place to explore his life and work.
At this page, I am providing information about the exhibits and hours of operation.
If you would like to visit the official website, please click here.

The Keats-Shelley Memorial House contains a lock of Keats’s hair, his death mask, original letters, and various other mementos.
It also contains mementoes of Keats’s Romantic brethren, Lord Byron and Percy Shelley. For example, there is a carnival mask Byron bought in Venice, a bust of Shelley, fragments of Shelley’s bones, and various paintings, letters and books. There is also a library of various Romantic-related works.

First and foremost, though, it is the house in which Keats died. Piazza di Spagna remains much as it was in 1821; you can look out of Keats’s window and replace the throngs of 20th century tourists and scooters with throngs of 19th century tourists and horses.
In Keats’s time, this was Rome’s main hotel district and the second home of foreign visitors. Now the Piazza di Spagna area is considered one of the most beautiful areas in Rome (no mean feat in such an extraordinary city!)

A note on transportation: I highly recommend walking to the Memorial House. Even if you visit Rome in the colder months, it is worthwhile walking across the city. For example, the cheapest hotels in Rome are near the Termini train station at the opposite end of the city from the Vatican. Yet you can walk from Termini to the Vatican easily – it is roughly four miles.
And, of course, you’ll pass many extraordinary sights along the way! Fountains by Bernini, beautiful buildings, small museums, interesting shops, a nice (and uncrowded) cafe…. These are best found traveling on foot. Believe me, four miles passes by very quickly when you have such beautiful scenery.

As for Rome’s Metro system, it was begun by Mussolini but never achieved his grand design. The reason? While digging the lines, workers stumbled upon various artifacts. Work would be stopped, excavations begun, and often the line completely abandoned. For that reason, the line has few stops. But since Rome can be crossed so quickly on foot, that hardly matters. Take the Metro if it’s raining; but if it’s a beautiful day, explore the old-fashioned way. Here’s some perspective – the Piazza di Spagna is just a mile and a half from the Coliseum.
Another Keats-related place to visit at Piazza di Spagna:
CAFFE GRECO
Via Condotti 86

Opened in 1760 by a Greek, this cafe became a favorite haunt of foreign artists. Byron, Keats, and the German romantic Goethe ate here – along with Casanova, the infamous King Ludwig, and the composers Liszt, Wagner, and Bizet. It’s pretentious, expensive, and often crowded but worth a quick stop for the history alone. You can either stand in the foyer or eat in the back room.
If you want to visit the Memorial House after a visit to Caffe Greco, proceed along the Via Condotti. The house is directly to the right of the Spanish Steps.