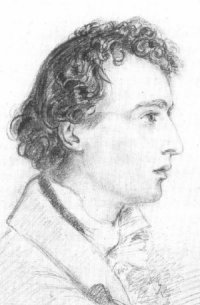 On 17 September 1820, a struggling young painter named Joseph Severn sailed from England as companion to John Keats. They arrived in Rome on 15 November. The trip was supposed to cure Keats’s lingering illness. The poet suspected it was tuberculosis; his friends and several doctors disagreed. They urged convalescence in a warm climate. Instead, Keats died just three months after his arrival.

Joseph Severn found himself in a most difficult situation. He had left England against his father’s wishes; he had no money; worst of all, he had no idea of the severity of Keats’s condition. Yet Severn rose to the challenge and became a devoted nurse. His troubles were noted and understood by Keats himself, and Severn was later thanked for his devotion by Percy Shelley in the preface to ‘Adonais’.

While in Rome, Severn wrote numerous letters about Keats to their mutual friends in England. These remarkable letters are the definitive account of the poet’s final months. Many of us have read selections from them in biographies of Keats. At this site, you can read them in their entirety: