This famous sonnet was written in October 1816 and first published in the Examiner on 1 December 1816. It is considered the highlight of Keats’s first volume of poetry. It was originally a gift for his friend, Charles Cowden Clarke. The two men had spent an evening reading George Chapman’s superb 17th century translation of the Iliad and Odyssey. The next morning, Clarke came down to breakfast and found the sonnet waiting for him. As he later recalled:

‘A beautiful copy of the folio edition of Chapman’s translation of Homer had been lent me…. and to work we went, turning to some of the ‘famousest’ passages, as we had scrappily known them in Pope’s version…. Chapman supplied us with many an after-treat; but it was in the teeming wonderment of this his first introduction, that, when I came down to breakfast the next morning, I found upon my table a letter with no other enclosure than his famous sonnet, ‘On First Looking into Chapman’s Homer.’ We had parted, as I have already said, at day-spring, yet he contrived that I should receive the poem from a distance of, may be, two miles by ten o’clock.’

Clarke noted the passage which most impressed Keats (the emphasis is Clarke’s own):
Then forth he came, his both knees faltring, both
His strong hands hanging downe, and all with froth
His cheeks and nosthrils flowing, voice and breath
Spent all to use, and down he sunke to Death.
The sea had soakt his heart through; all his vaines
His toils had racked t’a laboring woman’s paines.
Dead weary was he.
For most of Keats’s peers, Chapman’s work was too stark a contrast to Alexander Pope’s famous (and wildly descriptive) 18th century translation. One of Pope’s great admirers was Keats’s contemporary, Lord Byron, whose snobbish dismissal of Keats was partly inspired by Keats’s own dismissal of Pope’s work. In the original transcript of this sonnet, Keats alluded to his preference of Chapman over Pope in the seventh line – ‘Yet could I never judge what Men could mean’ – in other words, the power of Homer’s work eluded him until Chapman’s translation appeared.

This seventh line troubled Keats. It was included in the sonnet’s first publication in the Examiner. But upon reflection, Keats told Clarke the line was ‘bald, and too simply wondering’ and so he substitued ‘Yet did I never breathe its pure serene’ before publication in book form. For my part, I have included both versions below, the original manuscript version and the published / altered text.

The original manuscript of John Keats’s ‘On First Looking into Chapman’s Homer’: 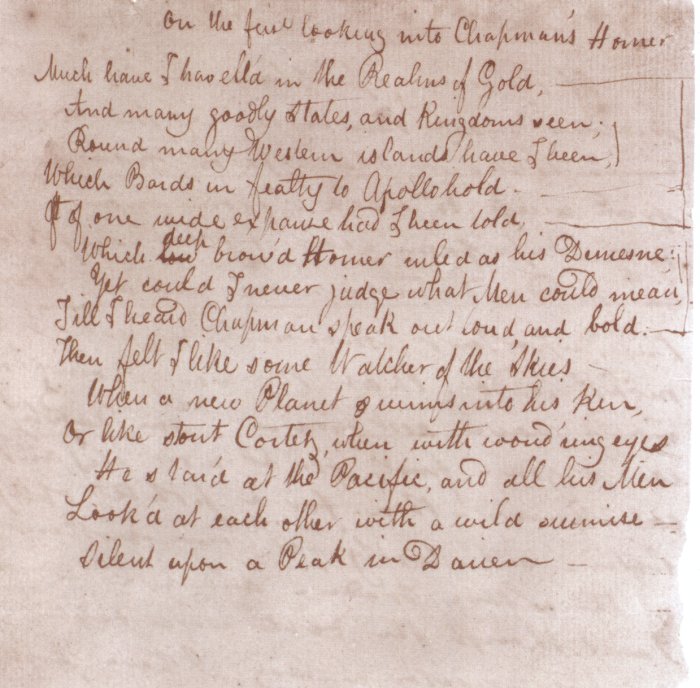 And many goodly states and kingdoms seen;
Round many western islands have I been
Which bards in fealty to Apollo hold.
Oft of one wide expanse had I been told
That deep-brow’d Homer ruled as his demesne;
Yet did I never breathe its pure serene
Till I heard Chapman speak out loud and bold:
Then felt I like some watcher of the skies
When a new planet swims into his ken;
Or like stout Cortez when with eagle eyes
He star’d at the Pacific–and all his men
Look’d at each other with a wild surmise–
Silent, upon a peak in Darien.