‘You speak of Lord Byron and me – There is this great difference between us.
He describes what he sees – I describe what I imagine – Mine is the hardest task.’
John Keats in a letter to his brother George, September 1819

The rivalry and dislike between George Gordon Noel Byron, 6th Baron Byron, and John Keats has been much discussed; in their own time, however, it was felt far more keenly by Keats. Byron was a flamboyant and handsome nobleman whose wit, charm and ancestral title accorded him entry into the most elite circles of English society. He was also an accomplished and celebrated poet. His first major work, ‘Childe Harold’s Pilgrimage’, was a great success and he enjoyed all the attendant benefits of celebrity. John Keats was a poor and struggling middle-class poet whose work was often savaged by the great critics of the age; he was advised that poetry was the provenance of nobleman such as Byron, and dismissed (by Byron, among others) as a ‘Cockney’ poet.

The animus between Byron and Keats is easy enough to explain. Byron was a snob, though he occasionally rose above such petty social concerns. He also revered the 18th century Augustan poets, particularly Alexander Pope, whose adherence to the classical tradition is echoed in his own early poetry. Keats’s work was deeply at odds with the Augustans; also, his ‘Sleep and Poetry’, which Byron read, was critical of their work. Keats found inspiration in the extravagant and sensuous wordplay of the 16th century and also admired the works of Wordsworth and Coleridge. Those first generation Romantics poets had caused a literary revolution with their rejection of Augustan classicism. And so, quite simply, Byron disliked Keats’s poetry on an aesthetic level. Keats felt likewise about Byron’s work; he considered it overrated, slavish and unoriginal. It was a sort of reverse snobbery. 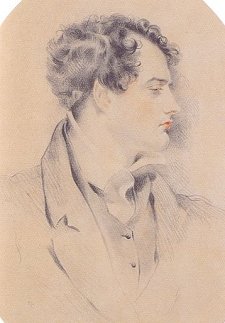 And there is also the simple envy Keats felt over Byron’s success. As he was forever beset by financial concerns, his jealousy is understandable enough. It was exacerbated by his belief that Byron succeeded only because he was an aristocrat who catered to an undemanding audience (‘You see what it is to be six foot tall and a lord!’, Keats remarked to a friend upon reading a favorable review of Byron’s work.)

But it is worth remembering that Byron came to recognize Keats’s talent. He also scoffed at the notion that anyone would be so sensitive as to die because of bad reviews (he himself was savaged more than once.) In this respect, Byron had more insight into Keats’s character than those who should have known him far better.

Letter from Byron to John Murray, 18 November 1820
‘P.S. – of the praises of that little dirty blackguard KEATES in the Edinburgh – I shall observe as Johnson did when Sheridan the actor got a pension. ‘What has he got a pension? then it is time that I should give up mine.’ – Nobody could be prouder of the praises of the Edinburgh than I was – or more alive to their censure – as I showed in EB and SR – at present all the men they have ever praised are degraded by that insane article. – Why don’t they review & praise ‘Solomon’s Guide to Health’ it is better sense – and as much poetry as Johnny Keates.’

Letter from Byron to John Murray, 26 April 1821
Is it true – what Shelley writes me that poor John Keats died at Rome of the Quarterly Review? I am very sorry for it – though I think he took the wrong line as a poet – and was spoilt by Cockneyfying and Suburbing – and versifying Tooke’s Pantheon and Lempriere’s Dictionary. – I know by experience that a savage review is Hemlock to a sucking author – and the one on me – (which produced the English Bards &c.) knocked me down – but I got up again. – Instead of bursting a blood-vessel – I drank three bottles of claret – and began an answer – finding that there was nothing in the Article for which I could lawfully knock Jeffrey on the head in an honourable way. – However I would not be the person who wrote the homicidal article – for all the honour & glory in the world, – though I by no means approve of that School of Scribbling – which it treats upon. —

Letter from Byron to John Murray, 31 July 1821
‘Are you aware that Shelley has written an elegy on Keats – and accuses the Quarterly of killing him? –
Who killed John Keats?
I, says the Quarterly
So savage & Tartarly
‘Twas one of my feats –
Who shot the arrow?
The poet-priest Milman
(So ready to kill man)
Or Southey or Barrow. –

You know very well that I did not approve of Keats’s poetry or principles of poetry – or of his abuse of Pope – but as he is dead – omit all that is said about him in any M.S.S. of mine – or publication. – His Hyperion is a fine monument & will keep his name – I do not envy the man – who wrote the article – your review people have no more right to kill than any other foot pads. – However – he who would die of an article in a review – would probably have died of something else equally trivial – the same thing nearly happened to Kirke White – who afterwards died of consumption.’

Letter from Byron to John Murray, 7 August 1821
‘I have just been turning over the homicide review of J. Keats. – It is harsh certainly and contemptuous but not more so than what I recollect of the Edinburgh R of ‘the Hours of Idleness’ in 1808. The Reviewer allows him ‘a degree of talent which deserves to be put in the right way’ ‘rays of fancy’ ‘gleams of Genius’ and ‘powers of language’. – It is harder on L. Hunt than upon Keats & professes fairly to review only one book of his poem. – Altogether – though very provoking it was hardly so bitter as to kill – unless there was a morbid feeling previously in his system. –‘

Byron’s ‘Observations upon an Article in Blackwood’s Magazine’, 12 November 1821
‘My indignation at Mr Keats’s depreciation of Pope has hardly permitted me to do justice to his own genius, which, malgre all the fantastic fopperies of his style, was undoubtedly of great promise. His fragment of Hyperion seems actually inspired by the Titans, and is as sublime as Aeschylus. He is a loss to our literature; and the more so, as he himself, before his death, is said to have been persuaded that he had not taken the right line, and was re-forming his style upon the more classical models of language.’
After Leigh Hunt told Byron that Keats had admired his greatest work, ‘Don Juan’, Byron included a stanza about Keats; it alludes to the popular conception of his death via bad review. The last two lines of the stanza clearly show that Byron dismissed the idea. He also mentions Keats’s lack of classical learning.
Incidentally, Keats did not like ‘Don Juan’; in a letter to his brother George, he referred to it as ‘Lord Byron’s last flash poem’ and Severn recorded Keats’s disgust with the work during their voyage to Italy.

Byron’s ‘Don Juan’, stanza 60 of Canto XI
John Keats, who was killed off by one critique,
Just as he really promised something great,
If not intelligible, – without Greek
Contrived to talk about the Gods of late,
Much as they might have been supposed to speak.
Poor fellow! His was an untoward fate: –
‘Tis strange the mind, that very fiery particle,
Should let itself be snuffed out by an Article.