‘I shall learn poetry here and shall henceforth write more than ever, for the abstract endeavor of being able to add a mite to that mass of beauty which is harvested from these grand materials, by the finest spirits, and put into etherial existence for the relish of one’s fellows. I cannot think with Hazlitt that these scenes make man appear little. I never forgot my stature so completely – I live in the eye; and my imagination, surpassed, is at rest – ‘

This letter was written during Keats’s walking tour of Scotland with Charles Brown. He wrote several such letters to Tom; you can view a July 1818 letter by clicking here, or visiting the Original Manuscript Images page. 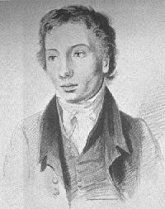 Tom was already ill with the tuberculosis which would kill him when Keats went on this trip. When the poet returned (having been summoned home by friends concerned over Tom’s health), he devoted himself to nursing his brother. This care ensured his own demise from the same disease less than three years later.

Here beginneth my journal, this Thursday, the 25th day of June, Anno Domini 1818. This morning we arose at 4, and set off in a Scotch mist; put up once under a tree, and in fine, have walked wet and dry to this place, called in the vulgar tongue Endmoor, 17 miles; we have not been incommoded by our knapsacks; they serve capitally, and we shall go on very well.

June 26 – I merely put pro forma, for there is no such thing as time and space, which by the way came forcibly upon me on seeing for the first hour the Lake and Mountains of Winander – I cannot describe them – they surpass my expectation – beautiful water-shores and islands green to the marge – mountains all round up to the clouds. We set out from Endmoor this morning, breakfasted at Kendal with a soldier who had been in all the wars for the last seventeen years – then we have walked to Bowne’s to dinner – said Bowne’s situated on the Lake where we have just dined, and I am writing at this present. I took an oar to one of the islands to take up some trout for dinner, which they keep in porous boxes. I enquired of the waiter for Wordsworth – he said he knew him, and that he had been here a few days ago, canvassing for the Lowthers. What think you of that – Wordsworth versus Brougham!! Sad-sad-sad – and yet the family has been his friend always. What can we say? We are now about seven miles from Rydale, and expect to see him to-morrow. You shall hear all about our visit.

There are many disfigurements to this Lake – not in the way of land or water. No; the two views we have had of it are of the most noble tenderness – they can never fade away – they make one forget the divisions of life; age, youth, poverty and riches; and refine one’s sensual vision into a sort of north star which can never cease to be open lidded and stedfast over the wonders of the great Power. The disfigurement I mean is the miasma of London. I do suppose it contaminated with bucks and soldiers, and women of fashion-and hat-band ignorance. The border inhabitants are quite out of keeping with the romance about them, from a continual intercourse with London rank and fashion. But why should I grumble? They let me have a prime glass of soda water – O they are as good as their neighbors. But Lord Wordsworth, instead of being in retirement, has himself and his house full in the thick of fashionable visitors quite convenient to be pointed at all the summer long. When we had gone about half this morning, we began to get among the hills and to see the mountains grow up before us-the other half brought us to Wynandermere, 14 miles to dinner. The weather is capital for the views, but is now rather misty, and we are in doubt whether to walk to Ambleside to tea – it is five miles along the borders of the Lake. Loughrigg will swell up before us all the way – I have an amazing partiality for mountains in the clouds. There is nothing in Devon like this, and Brown says there is nothing in Wales to be compared to it. I must tell you, that in going through Cheshire and Lancashire, I saw the Welsh mountains at a distance. We have passed the two castles, Lancaster and Kendal.

27th-We walked here to Ambleside yesterday along the border of Winandermere all beautiful with wooded shores and Islands – our road was a winding lane, wooded on each side, and green overhead, full of Foxgloves – every now and then a glimpse of the Lake, and all the while Kirkstone and other large hills nestled together in a sort of grey black mist. Ambleside is at the northern extremity of the Lake. We arose this morning at six, because we call it a day of rest, having to call on Wordsworth who lives only two miles hence – before breakfast we went to see the Ambleside water fall. The morning beautiful – the walk easy among the hills. We, I may say, fortunately, missed the direct path, and after wandering a little, found it out by the noise – for, mark you, it is buried in trees, in the bottom of the valley-the stream itself is interesting throughout with “mazy error over pendant shades.” Milton meant a smooth river – this is buffetting all the way on a rocky bed ever various – but the waterfall itself, which I came suddenly upon, gave me a pleasant twinge. First we stood a little below the head about half way down the first fall, buried deep in trees, and saw it streaming down two more descents to the depth of near fifty feet – then we went on a jut of rock nearly level with the second fall-head, where the first fall was above us, and the third below our feet still – at the same time we saw that the water was divided by a sort of cataract island on whose other side burst out a glorious stream – then the thunder and the freshness. At the same time the different falls have as different characters; the first darting down the slate-rock like an arrow; the second spreading out like a fan – the third dashed into a mist-and the one on the other side of the rock a sort of mixture of all these. We afterwards moved away a space, and saw nearly the whole more mild, streaming silverly through the trees. What astonishes me more than any thing is the tone, the coloring, the slate, the stone, the moss, the rock-weed; or, if I may so say, the intellect, the countenance of such places. The space, the magnitude of mountains and waterfalls are well imagined before one sees them; but this countenance or intellectual tone must surpass every imagination and defy any remembrance. I shall learn poetry here and shall henceforth write more than ever, for the abstract endeavor of being able to add a mite to that mass of beauty which is harvested from these grand materials, by the finest spirits, and put into etherial existence for the relish of one’s fellows. I cannot think with Hazlitt that these scenes make man appear little. I never forgot my stature so completely – I live in the eye; and my imagination, surpassed, is at rest – We shall see another waterfall near Rydal to which we shall proceed after having put these letters in the post office. I long to be at Carlisle, as I expect there a letter from George and one from you. Let any of my friends see my letters – they may not be interested in descriptions – descriptions are bad at all times – I did not intend to give you any; but how can I help it? I am anxious you should taste a little of our pleasure; it may not be an unpleasant thing, as you have not the fatigue. I am well in health. Direct henceforth to Port Patrick till the 12th July. Content that probably three or four pair of eyes whose owners I am rather partial to will run over these lines I remain; and moreover that I am your affectionate brother John.