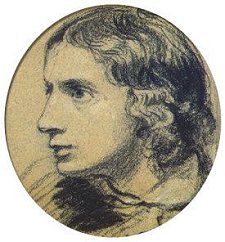 The earliest surviving portrait of Keats, by Severn in 1816.

Sketch of John Keats (charcoal)
by Joseph Severn, c. 1816
This is the earliest surviving portrait of Keats.

Portrait of John Keats (oil on ivory)
by Joseph Severn, 1819
This miniature was made and exhibited in 1819 .

Sketch of John Keats
by Charles Brown, July 1819
This is the portrait featured on the main page merged with Keats’s signature.  I have posted two larger versions of this sketch – tinted and grey-scale – if anyone wants a new wallpaper for their computer.

Sketch of Keats
by Charles Wass after William Hilton; c1841

Portrait of Keats reading
by Joseph Severn; at the NPG, London

Portrait of Keats, listening to a nightingale on Hampstead Heath
by Joseph Severn, c.1845
I rescanned this image July 2004.

The most famous portrait of Keats
by William Hilton, after Joseph Severn; at the NPG, London
I rescanned this image June 2004.

Silhouette of Keats by Charles Brown
given to Fanny Keats, 1819

Silhouette of Keats by Marianne Hunt
This silhouette was made in 1820, while Keats recuperated at Leigh and Marianne Hunt’s home.

Keats’s signature:  ‘John Keats alias Junkets’
This is Keats’s signature, including his nickname ‘Junkets’, from a letter to Leigh Hunt, 10 May 1817.  It was Hunt who dubbed Keats ‘Junkets’ due to the poet’s Cockney(ish) pronunciation of his name.

Drawing of the Sosibios Vase by John Keats
with his signature

Letter from John Keats to his sister, Fanny Keats
30 November 1818; letter written after the death of their brother Tom.
John sent this letter to prepare his sister for the later news of the death.

Letter from John Keats to his brother, Tom
10-14 July 1818
This letter was written during Keats’s walking-tour of Scotland with Charles Brown.

Letter from John Keats to his fiancée, Fanny Brawne
August 1820
This is the last surviving letter from Keats to Fanny, written while he was staying at Leigh Hunt’s home.

Original manuscript images of Keats’s works
includes ‘Ode to a Nightingale’, ‘I stood tip-toe upon a little hill’, ‘This pleasant tale is like a little copse’, ‘Hyperion’, ‘Bright star!’, ‘On First Looking into Chapman’s Homer‘, ‘Lamia’, and more

The gravesite at the Protestant Cemetery

My portraits of Keats’s gravesite at the Protestant Cemetery, Rome

Miniature portrait of Fanny Brawne
Fanny was the great love of Keats’s life.  Please read more about their romance.

Ambrotype of Fanny Brawne
taken in the 1850s

Sketch of Leigh Hunt
by Thomas Wageman
Hunt was friends with Byron and Shelley as well.  He encouraged Keats’s decision to pursue a career in poetry.

Joseph Severn
self-portrait, c.1820
Severn painted and sketched Keats many times.  He also accompanied the poet to Rome and nursed him through the last months of his life.  Please read more about Keats’s illness and their time in Rome.  You can also read Severn’s letters from Rome; they are the definitive account of Keats’s final months.